Maksin also joins Orion cellist Judy Stone and other Ensemble members on Arensky’s String Quartet in A minor, Op. 35. Although he is almost completely unknown in the United States, Arensky (1861-1906) is considered in Russia to be among the most illustrious Russian composers. The unusual use of two cellos adds to the intense darkness of this work. Written only months following Tchaikovsky’s death, this work features contrasts of mood and tonal colorations.
The Trio in A minor by Carl Frühling (1868-1937) features radiant moments from the clarinet and gentle musings from the piano. However, the mystical longings expressed in this trio are akin to Arensky. Born in Ukraine, Frühling was a gifted pianist whose works are known for their lyrical qualities.
Gaspar Cassadó (1897-1966) was a cellist and composer born in Barcelona. When Cassadó was nine, Pablo Casals heard him play in a recital and offered to instruct the young cellist. The Piano Trio in C Major, which Cassadó composed in 1926, features the rhythmic passions that are typical of Spanish composers, as well as many tonal contrasts, exotic and unexpected changes of tempo and dynamics and a great variety of emotional heights and depths.

The Imperial Sound’s blithe synthesis of 21st-century irony and bright, unselfconscious AM-radio pop is both brave and unique. And catchy as hell. The band’s debut album, The New AM showcases songwriter Frederick Mosher’s hook-driven heritage – with influences from Todd Rundgren and Carole King to The Replacements and Elvis Costello – delivering infectious, shimmering songs that celebrate the craft and style of the best pop music. Pravda Records will release the new album on August 31st, and the band will celebrate at the Hideout September 1st with guest singers Renaldo Domino and Robert Cornelius.

Kenn Goodman (keyboards) and Mosher (guitars and vocals) have been partners in a variety of musical ventures, from the Chicago-based Pravda Records store and label to the legendary trash-rock trio The New Duncan Imperials, for many years. Their latest incarnation, as the founders of The Imperial Sound puts them at the center of a group of seasoned musicians with years of experience and a drive for self-reinvention.

October is Domestic Violence Awareness Month across the United States. Join us at our 12th annual Stride Against Violence 5K Run/Walk on Sunday, October 14, 2018 at picturesque Montrose Harbor.

Register today as a participant or volunteer and set up your fundraising page. After you fill out the registration information, it will come to a donate page where you can either make a donation or click the button to become a fundraiser. Follow the steps, add your picture and personal story about why you are running or walking for Apna Ghar during domestic violence awareness month. Find out more at www.apnaghar.org/stride-against-violence

Stride Against Violence is open to people of all ages and abilities, and is family-friendly. It will be a fun day with food, drinks, live entertainment, a warm-up stretch with Bollywood Groove, and awards for runners and fundraisers. So, lace up your shoes and get ready for our 12th Annual Stride Against Violence 5K Run/Walk! 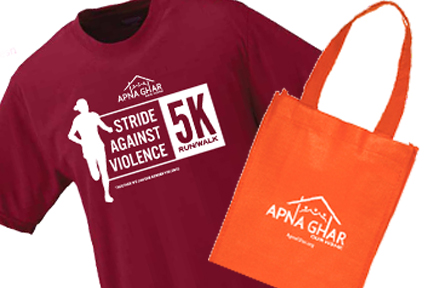 Each participant will receive a dry-fit t-shirt, bag and 3-day pass to Cross Town Fitness.

Set up your personal fundraising page to support Apna Ghar on Sunday, October 14, 2018.

This year we have some exciting prizes for fundraisers. If you raise:

If you already registered but didn’t create a fundraising page, it’s not too late. You can follow the same steps above.

If you have any questions, please feel free to reach out to Ashley at (773) 883-4663 or atsuruda@apnaghar.org for assistance. 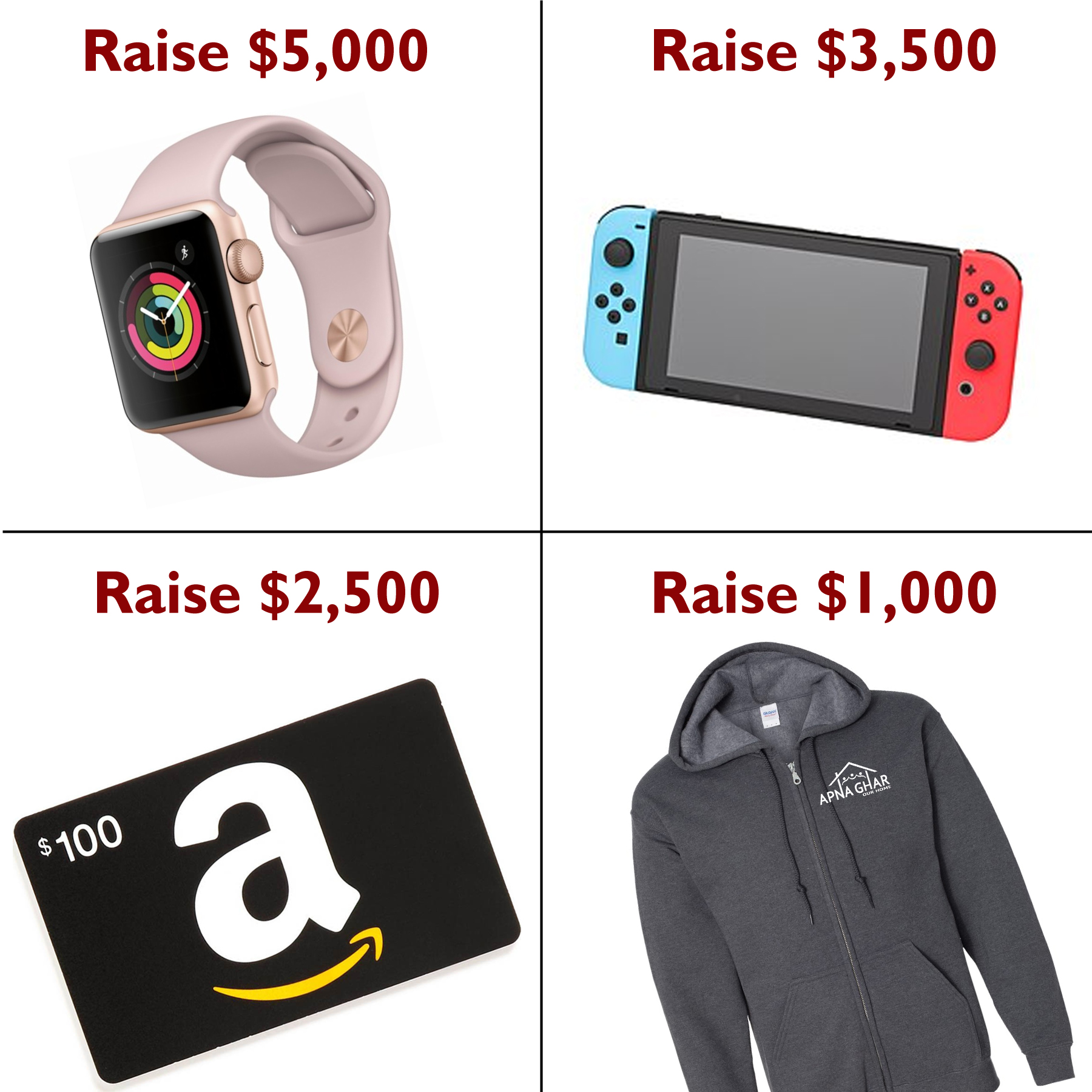 Make a donation to support a team or individual

Make a donation to support a team or individual fundraiser.

Sign up to volunteer. We need volunteers to be on the course to direct runners and walkers, help pass out food and drinks, pass out water at the water station on the course, and more!

Support Apna Ghar all year round by becoming a recurring donor.

Together We Can End Gender Violence!

Thank You to our Sponsors and Partners!

Official Warm Up Stretch by

(corner of Montrose and Simmonds Drive) 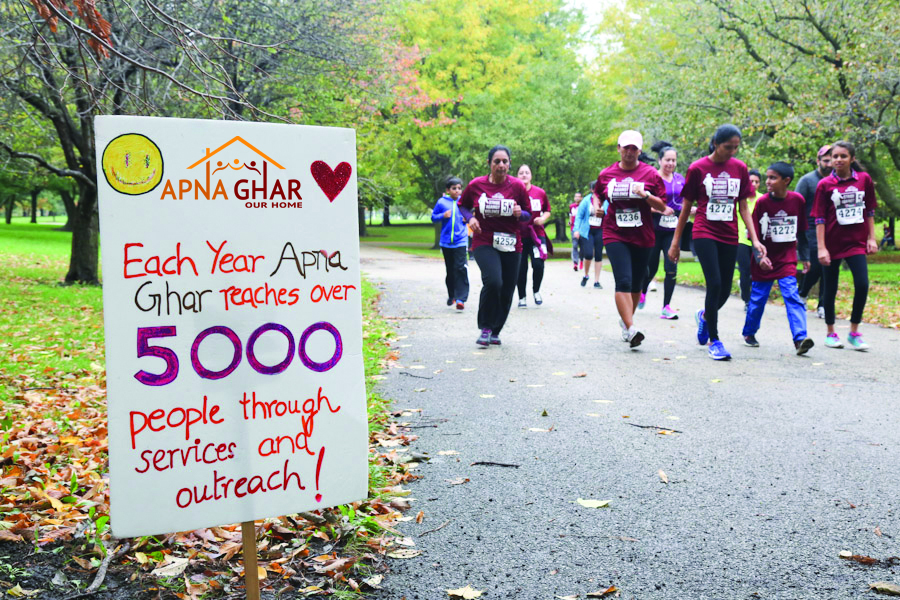 Awards and prizes for top fundraiser, top team, first overall male and female participants, and top 3 in each age category!

If you couldn’t make it, there are still some other ways to support Apna Ghar:

Make a donation in any amount

CHICAGO –Refuge Theater Project is proud to announce the cast and production team for its first production in its 2018 – 2019 season, The Last Session, October 26 – December 2, book by Jim Brochu, with music and lyrics by Steve Schalchlin, additional lyrics by John Bettis and Marie Cain directed by Refuge Theatre Project’s Artistic Director Christopher Pazdernik and music directed by Erik Pearson. The Last Session runs  Fridays and Saturdays at 8 p.m. and Sundays at 7 p.m. at Atlas Art Studio, 4809 N Ravenswood Ave. Previews are Friday, Oct. 26 and Saturday, Oct. 27 at 8 p.m. with opening/press night Sunday, Oct. 28 at 7 p.m. There are two additional performances Monday, Nov. 12 and 26 at 8 p.m. Preview tickets are $15, regular run tickets are $30 each and available at RefugeTheatre.com.

Nominated for Best Musical by the New York Drama League and the New York Outer Critics Circle and written as musical therapy, in real time, to songwriter Schalchlin’s own AIDS diagnosis and subsequent battle on the deathbed, The Last Session, an off-Broadway hit in its original run in 1997, reunites a group of singers, friends and band mates to record one final album, except for the unexpected arrival of a guest singer who spoils what was supposed to be a nice, quiet goodbye party. All of them are deeply connected, yet, unaware that their host carries a big secret: he plans to end his struggle with AIDS after the session.

“As an artist living with HIV, I feel compelled to share stories from the early days of the HIV/AIDS epidemic” Artistic Director Pazdernik said. “We have to make sure we don’t lose the stories of those who fought and died so today’s generation of HIV patients could live longer. It’s too easy to take modern medicine for granted–we need to also honor the debt we owe to those who were on the front lines of this unfathomable plague.”

Refuge Theatre Project will be partnering with several Chicago social service agencies during the run of the production to bring awareness and support to organizations that continue the fight against HIV/AIDS in our communities today including AIDS Foundation of Chicago, Howard Brown Health and Season of Concern.

ABOUT CHRISTOPHER PAZDERNIK, DIRECTOR
Christopher Pazdernik is a director/choreographer with “a near encyclopedic knowledge of musicals” (Newcity).  He is best known for the critically acclaimed production of High Fidelity (Jeff Awards for Best Director and Best Production of a Musical) at Refuge Theatre Project, where he also serves as artistic director. With Porchlight Music Theatre, Pazdernik is a proud artistic associate, and serves as company manager and casting associate. He has directed and choreographed many Porchlight Revisits productions including The Rink, Anyone Can Whistle, City of Angels, Applause and Do Re Mi; served as associate director for Porchlight’s Merrily We Roll Along and has co-curated the Porchlight New Faces Sing Broadway series.  Recent other credits include Carrie (Ohio Northern University), Wicked City (Chicago Theatre Workshop), Planted (Chicago Musical Theatre Festival), Make Me a Song (Eclectic Theatre Co.) and Story of A Story (The Untold Story) (Underscore Theater Co.). He is also a frequent cabaret director and curator including Broadway’s Cult Classics at Davenport’s Piano Bar and the His & His series at Pride Films & Plays. An openly HIV+ artist, Pazdernik was a 2016 Windy City Times 30-Under-30 honoree for his contributions to Chicago’s LGBTQ community. He currently serves on the Ambassador Committee for the AIDS Run/Walk Chicago and as chairperson on the Community Advisory Board for Howard Brown Health, one of the nation’s largest LGBTQ organizations.
ABOUT ERIK PEARSON, MUSICAL DIRECTOR/ “Gideon”
Erik Pearson most recently appeared in Underscore’s hit production of Haymarket as “Albert Parsons.” A Minnesota native now living in Chicago, he has spent the past four seasons with Montana Shakespeare in the Parks, including performing “Malvolio” in Twelfth Night. Other favorite theatre credits include “Prof. Walling”  in Citadel’s The Explorers Club; “The Prince,” Children’s Theatre Company’s Cinderella;  “Tulsa,” in Theater Latte Da’s Gypsy; “Baby John” in Chanhassen Dinner Theatres’ West Side Story; “The Soldier/Alex” in Sunday in the Park with George and “Marvin in Falsettos. He has also performed with the Guthrie Theater, Aspen Opera Theater Center and the Minnesota Orchestra, among others. As a teaching artist, he has worked with Minnesota high schools on projects including A Midsummer Night’s Dream, Into the Woods, Les Misérables, Evita and Sunday in the Park with George. Pearson studied at St. Olaf College and the London Academy of Music and Dramatic Art.
ABOUT REFUGE THEATRE PROJECT
Refuge Theatre Project strives to foster a broader, more accessible theatre community. They promote the production of under-produced, under-appreciated musical theatre in traditional and non-traditional theatrical spaces creating a unique, affordable, only-in-Chicago theatrical experience.
REFUGE THEATRE PROJECT’S 2018 – 2019 SEASON CONTINUES WITH…
Hands on a Hardbody
CHICAGO PREMIERE
Based on S.R. Bindler’s documentary film “Hands on a Hardbody”
Book by Doug Wright
Music by Trey Anastasio and Amanda Green
Lyrics by Amanda Green
Directed by Refuge Theatre Project Artistic Director Christopher Pazdernik
Music Directed by Jon Schneidman
March – May, 2019
Tickets: Previews: $15 Regular Performances: $30
Nominated for Best Musical by the New York Drama League and inspired by true events, the hilarious and hopeful Hands on a Hardbody features a book by Doug Wright (Pulitzer Prize winner, I Am My Own Wife), lyrics by Amanda Green (Bring it On: The Musical) and music by Trey Anastasio (Phish) and Green and is based on the acclaimed 1997 documentary of the same name by S.R. Bindler, produced by Kevin Morris and Bindler. Only one winner can drive home the American Dream and 10 hard-luck Texans all want the keys. Under a scorching sun for days on end, they will each fight to keep at least one hand on a brand-new truck in order to win it.
Hands marks the third collaboration between Director Pazdernik and Music Director Schneidman at Refuge. They previously worked together on the Jeff-Award winning High Fidelity and last season’s Jeff-Award nominated Spitfire Grill.
New York Magazine said Hands on a Hardbody is “Hands down … musical theater heaven!” and The New York Times said, “You can hear the voice of America singing in this daring new musical.”

Howard Brown Health exists to eliminate the disparities in healthcare experienced by lesbian, gay, bisexual and transgender people through research, education and the provision of services that promote health and wellness. Howard Brown is the largest LGBTQ organization in the Midwest, providing primary and specialty healthcare, social services, and infectious disease screenings to more than 34,000 people each year.  Our 10 clinics span the City of Chicago, from Englewood to Rogers Park.  For more information, visit howardbrown.org.

Season of Concern is the Chicagoland theatre community’s fundraising effort in providing compassionate care to those in our community who are experiencing the effects of incapacitating illness, injury or circumstance. Artists helping artists; family helping family. seasonofconcern.org.